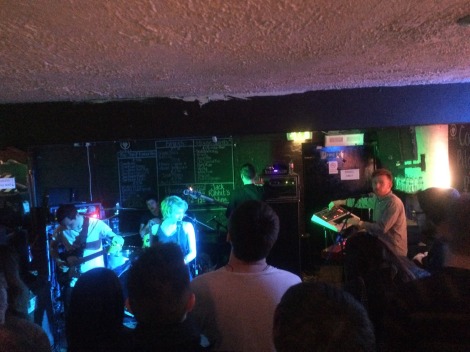 If truth be told, Derby has always been a little apathetic when it comes to music. The city’s main venue, fittingly titled, The Venue, has played host to a few artists with high esteem – Tim Burgess, The Wonder Stuff, British Sea Power, The Lemonheads et al. But rarely does it sell out.

And while it will always have a proper rock ‘n’ roll pub in The Vic, with its legendary grotty back room, and with bars now hosting bands (Bar One and The Hairy Dog), it seems Derby venues are trying to carve out a music scene for the city. It will never rival its big musical neighbour Nottingham, but if the sold out 2Q Festival is a barometer of sorts, then maybe Derby is beginning to make indents on the musical sphere.

And the city certainly has talent. Many of the early bands on the bill – which includes almost 50 acts – are from Derby or nearby. One of the earliest to perform at 2:15pm, Scribble Victory, play at The Hairy Dog, a bar with a decent-sized area for bands to play in.

“I nearly said ‘Good evening, Derby’”, announces Scribble Victory’s lead man, momentarily confused by the darkness of the place when outside the sun is shining. The duo, from Derby suburb Chester Green, play an acoustic set which verges on emo with its impassioned vocal delivery. Both men are incredibly dexterous with their instruments of guitar and drums and attract a sizeable crowd in the early afternoon.

In the courtyard at the back of Bar One, Dean Jackson from BBC Radio Nottingham, and a champion of local talent, is compering a BBC Introducing stage which will be headlined by Radio One darlings Eliza and the Bear, a massive coup for Dean and the festival.

Long before them, though, Derby/Nottingham four-piece Eva Plays Dead play very loud. Fronted by young female screamer Tig, they produce an ear-shredding performance of heavy rock and soul, particularly on the impressive ‘1950’s Woman’, which is like The Gossip before they imploded. They’re still audible as your reviewer makes his way back into town for another violently noisy local band, Replica Jesus.

The Old Bell pub has undergone a major overhaul, and has been transformed from a sticky-carpeted dingy den selling cheap beer to a bright and airy pleasant retreat for casual afternoon drinkers of fine beers and wine. It’s an ideal setting for, say, an afternoon tea, but Replica Jesus, although dressed for the occasion – the four of them resplendent in white shirts and black ties – are not here for anything as quaint. Their primary motive is to shred the ears of everyone in attendance. Their lead man, Mat Davies, enters the crowd on numerous occasions throughout their cacophonous set, terrifying the front few rows, screaming into smart phones as they video him. Their brash hardcore stoner punk seems incongruous in such plush surroundings, but you play where you’re placed, and they were excellent. This is a band with a sharp look to match their viciously sharp sound.

Upstairs in Vines, a trendy bar tucked away down an ally way off of Derby’s cool Sadler Gate, the brilliantly monikered The Saint Pierre Snake Invasion are howling their snarling punk at a packed audience. They sound like Welsh deviants Future of the Left, both musically and comically. Bristolian front man Damien jokes: “This one is called ‘If The Only Way Is Essex Then Kill Me Now’”. The name alone gets a huge cheer. The song is brilliant, as is their entire set. Great name, equally matched by their work.

In The Venue, people are eagerly awaiting the ‘Next big thing to come out of Sheffield’. It’s The Sherlocks, who are being touted as the next Arctic Monkeys. And it’s clear to see why, as they emit a sound which as 2 parts Arctic Monkeys, 1 part The Courteeners (I’m aware the latter are from Manchester before you write in). It’s a mash that will work eventually, if they can improve on their stage presence a little.

Back in The Hairy Dog, another one of the Radio One elite are a little livelier. Spring King are a post-punk four-piece from Manchester who possess that rarity of sights: a singing drummer. They, like The Sherlocks, have just returned from Austin, Texas, wowing the Americans at the SXSW Festival with their very British sound. It’s easy to see why commercial radio is all over them. The hype that surrounds this band is completely justified.

Back at The Venue and the majority of the crowd are here for headliners Reverend and The Makers, but before John McClure’s lot, Nottingham indie-funkers Dog is Dead – sorry, D.I.D. as they’re now called due to a conflict of names – are providing people’s hips with an excuse to shake, especially when the saxophone comes out.

There are numerous bands that can be considered as headliners. The afore-mentioned Reverend and the Makers, alternative rock outfit We Are The Ocean, new indie A-listers Eliza and the Bear and former X-Factor-lass-gone-serious and acoustic guitar/witty northern entertainer Lucy Spraggan. But none are is interesting or as entertaining as Sheffield’s visceral Rolo Tomassi. Their mathcore has no rules, no jurisdiction, and no logic. Eva Spence, the band’s sweetly pretty leading lady, somehow makes her throat make the most horrid of guttural yelps as swirls of beeps and blips and demonic guitar squalls envelop her. You really do have to see her in action to appreciate her talent.. They’re chaotic, loud, abrasive, discordant and utterly, utterly compelling. As ever.

Derby’s debut urban festival has been a success. Varied, well-planned and very well-attended. Same again next year, then? 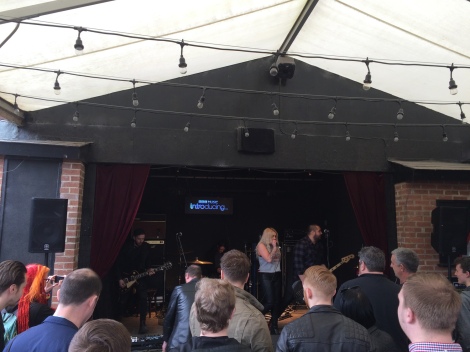 Eva Plays Dead at All Bar One

Replica Jesus at The Old Bell

Scribble Victory at The Hairy Dog

Spring King at The Hairy Dog