This was my first taste of this metel-fest. Similar to Dot to Dot in its nomadic nature, as bands play Nottingham’s main venues from 12:30 until the early hours. It had me hooked.

The weather outside is delightful. Nottingham is bathed in Spring sunshine. The mouth-watering whiff of barbecued burgers tantalises the nostrils should you happen to step within a 100 yard radius of the Rescue Rooms’ patio, and the calming ambiance of the Sun’s rays makes for blanket happiness in NG1.

But beneath street level something is stirring. There’s a deep rumbling sound from within the city’s belly. But this isn’t the end of the world come early, it’s not Armageddon. But it is earth-shatteringly remorseless.  It’s the start of Hit The Deck, Nottingham’s inner-city, urban rock-fest, and that rumbling noise is Cars On Fire, who are ripping up a packed Stealth with frantic, energised hardcore.

They set the precedent for an incredible day of rock, punk, metal, screamo, hardcore and just about every heavy genre you can shake your fist at. It’s like a compact version of the nearby Download Festival – same level of intensity, only on a smaller scale.

Although it’s doubtful there’s an in-built hair salon at Download, so Hit The Deck is already 1-up on its big brother, thanks to The Rig’s transformation into a multi-faceted hub containing not only a salon, but merchandise stalls, a bar and a cafe run by the city’s own purveyors of good food, Homemade.

The festival spreads itself across four stages: Rock City’s main hall and its Basement, and Rescue Rooms and Stealth, with each venue full to bursting point.

The demographic is wide. From long-haired hunched-back teenagers in nothing but black, to multi-coloured scenesters; from skater-boy chic to rock chick fashionistas, it’s a melting pot of styles and trends, while the music on offer caters for each and every taste.

Without question the big guns are The Blackout. The Welsh six-piece are gaining much notoriety with their melodic FM-rock. Their slot at Rock City in the late evening is a heavily congested affair. The younger audience instantly gravitate towards them, their hands thrusting stagewards as they bounce along and form a sweaty maelstrom.

But whilst The Blackout’s outlay is easily digestible, other bands’ material is harder to swallow, yet no less entertaining.

The James Cleaver Quintet scream their way through their early afternoon set at a stiflingly hot Stealth despite sound problems. The lead singer enters the crowd to spoonfeed the audience a dollop of pure discordance. It’s fearsome stuff, but nowhere near as terrifying as Glasgow’s Bleed From Within who play the same stage a little later.

They pulverise the crowd with bloodcurdling screamcore set to cochlea-splitting levels of severity. It shouldn’t work, but really does.

Elsewhere at Rock City, Hyro Da Hero is the surprise package of the day. Think Rage Against The Machine fronted by a less cloying Dizzie Rascal, if Dizzie Rascal was from Texas, and you’re almost there.

His brand of urgent rap-metal is refreshing, and his energy palpable. The crowd instantly take to him, hands waving in unison, replicating their new hero. But they’re left wanting a lot more than the meagre 25 minutes they get.

Cancer Bats are no strangers to Nottingham crowds. They often bring their hardcore punk over from Toronto, and their delirious evening set at the Rescue Rooms is wall-to-wall rammed, with fans eager to ingest their potency.

Front man Liam Cormier is in the crowd more than he’s on stage, launching himself into a sea of grateful hands, as large balloons bounce around him. It’s one hell of a performance.  Little wonder the queue outside prior to the gig was beginning to snake its way beyond Stealth’s entrance and onto Goldsmith Street.

When not being carried by his audience, Liam waxed lyrical about Norwegian punk metal titans Kvelertak, who performed earlier at the same venue.

Liam stood stage side as the band rattled through brutal good-time metal. The crowd may have been a little on the short side, mainly due to the band being relatively unknown on these shores, but if they carry on winning over crowds, as they did so comfortably here, showering them with a pioneering blend of hard-hitting yet catchy rock’n’roll bellowed entirely in Norwegian, then this six-piece’s stock will rise considerably.

But for all the good, there was a degree of bad. Sound issues blighted many performances, including that of Cancer Bats, whose blistering punkrock deserved a higher volume, whilst simply popping your head into Rock City’s basement told you that that stage was the weakest, band quality wise.

But largely, this inaugural cavalcade of rock was a success. From 12.30, when Against The Flood and Everose simultaneously got the party started, to Florida-based Christian metal merchants Underoath’s defiant closing set of sludgy metalcore, Hit The Deck was a hit. 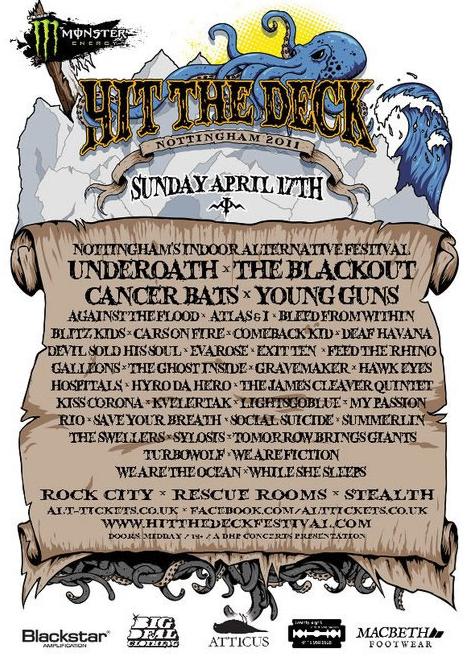